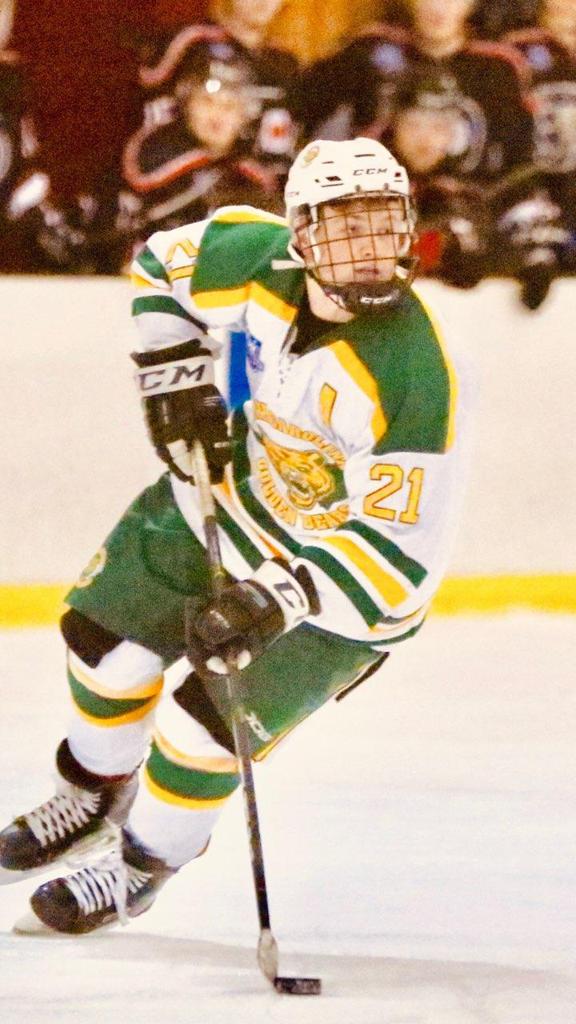 The NC Golden Bears are excited and proud to announce that its 2018-19 leading scorer, Devin Phillips has signed with the Brooks Bandits of the Alberta Junior Hockey League. Phillips was 5th in the EHL in scoring as a 2001 birth year rookie,  with 75 points. After attending an initial camp with the Bandits, held in April during their Canadian Junior Championship run, Phillips caught the eye of the teams coaches and was asked to attend a tournament in Toronto in late June. It was at this Tournament that Philips showed his competitive level. Not long after he was offered a spot in Brooks for the 2019-20 season

Phillips is a rare talent. His compete level is off the chart and do not tell him he cannot do something. He will ultimately prove you otherwise. “Devin has worked extremely hard academically and athletically over the years. His determination along with an unmatched desire to compete at a high level, I’m sure are the reasons he gained this opportunity” a very proud father Drew Phillips exclaimed.

As many first-year programs do, the Bears struggled to be competitive and the loses mounted. However, Phillips never waivered, at least not at the rink. He always came and worked hard. Always looking to get better. Never showing any signs of quit.

Golden Bears Head Coach Brent Selman also added “there is no doubt that Devin will respond positively to the challenges ahead. He has the maturity and motivation that is not seen often”. Ultimately this was a best case scenario result for a team that would like to develop a reputation of moving the young players on to Tier 1 or Tier 2 hockey and to move the older players on to NCAA college hockey in the coming years.

“Our main focus of 2018-19 was moving our young players like Devin on to a program like Brooks. We were constantly asked in the recruiting process this spring by players who wanted him for a teammate, if Phillips was coming back for the 2019-20 season and it was always our response that if we could not get Devin somewhere then we were not doing our job” said Paul Strand the Golden Bear owner and GM.

Phillips contacted the Bears in the spring of 2018 asking for advice on his hockey path. He attended a very good local school and his family wanted him at home for another year, his senior year, to graduate. However everyone was telling him he needed to leave town and ‘head up north”. The Bears explained that there were good opportunities in the hockey hot-beds, however he could develop just as well playing against the 19 and 20 year old future NCAA payers that are cultivated in the EHL. It was a risk, yes, but anyone who knows Devin, he doesn’t back down from risk.

The risk paid off. “This opportunity with the Golden Bears and incredible organization start with Head Coach Selman and GM Strand. This could not have been a better year for the Phillips family and/or for Devin”, father Drew said of the organization. The 2018-19 season was not without its up’s and downs, but the focus remained constant. The Golden Bears pride themselves in being an organization that will constantly work to move its capable players on to where they need to be. From making phone calls to coaches and scouts to accompanying players to tryouts.

Coming into the 2018-19 inaugural Eastern Hockey League season, the NC Golden Bears had some modest goals. The most important of these goals was to provide a place for local players to develop and move on to NCAA hockey or Tier 1 and 2 hockey leagues sanctioned by USA Hockey or Hockey Canada. Starting a franchise in the EHL was an easy decision as it had developed a good reputation for moving kids on to college.

“We were fortunate to have Devin represent the Golden Bears in our inaugural season. He made the most of the opportunity and was rewarded with an opportunity to pay in one of the most respected Tier II Jr A leagues in Canada and for an elite program in the Brooks Bandits” said Selman. This is a great milestone in the organization’s short history. The Golden Bears wish Phillips the best of luck as his career takes one more step forward.